Select a photograph to view a photo gallery 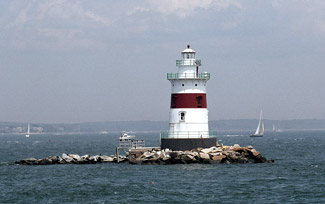 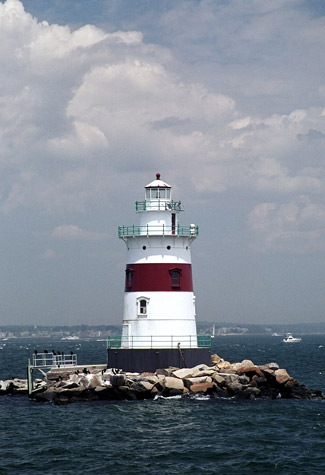 See our full List of Lighthouses in New York

Most of the maritime landmarks along the Atlantic coast have names whose origin can be found by digging into historical records a bit. Located about a mile north of Fishers Island’s East Point, Latimer Reef is reportedly named after a James Latemore. During the Revolutionary War, the courageous Latemore embarked in a skiff to spy on a British Fleet at anchor in Fishers Island Sound. An alert redcoat aboard one of the vessels spotted Latemore’s small craft, and a boat gave chase. Latemore ran aground on his namesake reef, and the British soon captured him and took him back to their fleet. At sunrise the following day, Latemore was hanged aboard one of the British frigates then received a watery burial in the Sound.

In 1838, Lieutenant George M. Bache of the U.S. Navy recommended that an unlighted beacon be erected on Latimer Reef, as it was “much in the way of vessels passing in either direction through the sound, or bound into Stonington.” This navigational aid was subsequently described as an “iron spindle, surmounted by a square cage-work day-mark.”Starting in 1837, the Stonington Railroad and Steamboat Company maintained a private lightship near the reef in Fishers Island Sound, and this was replaced in 1849 by the government-operated Eel Grass Shoal Lightship. Also known by the designation L, the lightship was a forty-one-ton wooden vessel showing a fixed white light, with a fog bell and horn on board.

In the early days of lightships, each ship was referred to by the name of the station where they were posted, but as the number of lightships increased, it became more difficult to keep track of them, especially when ships were transferred to different stations and districts. In 1867, the Lighthouse Board assigned numbers to all active lightships, while years later (in the 1930s) letters were posthumously assigned to the earliest lightships so they could be uniquely identified in historical documents.

Lightship L was replaced at Latimer Reef by LV 12, and then Lightship LV 25 took over in 1872. Five years later, LV 25 was declared unfit for duty and deemed too old and too small to make refurbishing it worthwhile. It was replaced by LV 17, which in turn gave way for the return of LV 12 in 1882. Finally, in 1884, a permanent lighthouse commenced operation on nearby Latimer Reef, and Eel Grass Shoal Lightship was discontinued.

Latimer Reef Lighthouse, which was placed on the western end of the half-mile-long rocky reef, consists of a prefabricated, cylindrical, forty-nine foot-tall, cast-iron tower with a cast-iron, concrete-filled foundation. The Lighthouse Board published the following “Notice to Mariners” to publicize the establishment of the new light:

On and after July 1, 1884, a flashing white light of the fifth order, flashing at intervals of ten seconds, will be exhibited from the lighthouse recently constructed at Latimer’s Reef, east end of Fisher’s Island Sound, New York. The apparatus lights 360 degrees of the horizon, and the focal plane is 56 [feet] above mean low water. The light should be seen in clear weather from the deck of a vessel 15 feet above the sea 13 nautical miles. The structure is a white tower standing on a red pier and surmounted by a black lantern.
Upon the establishment of this light the lightship upon Eel Grass Shoal will be discontinued.

There were a number of other lights built around this time using the same design and employing the same construction methods. They were initially referred to as “Coffee Pot” lights because of their shape, but a few decades later, after the internal combustion engine was in common use, these towers became more commonly known as “Spark Plug” lighthouses.The first head keeper assigned to Latimer Reef Lighthouse was Charles E.P. Noyes, who had served as Captain aboard Eel Grass Shoal Lightship, and Samuel C. Gardner was appointed the first assistant keeper. Besides minding the light, the keepers were also responsible for a fog bell that was tolled every fifteen seconds during limited visibility.

A stone pier was built on the northwest side of the lighthouse in 1890 and fitted with an appliance for hoisting the station’s boat. Two significant changes were made to the lighthouse in 1899: A fourth-order lens, which revolved on ball bearings rather than wheels, replaced the original fifth-order lens, and the white tower was given a brown band about its midsection. The white towers at Montauk Point, Stratford Point, and Execution Rocks also received their central brown bands at the same time.

Latimer Reef was apparently one of the more uncomfortable stations for its keepers. The spark plug lights were normally designed as secondary lights in smaller bodies of water where a stone structure wasn’t economically feasible. Even with a brick lining, the iron structures were reportedly bitterly cold in the winter and miserably hot during the summer.

After twenty-five years at Latimer Reef, Keeper Noyes, who had spent a number of years in the whaling industry operating out of Stonington before entering the employ of the government at the beginning of the Civil War, was transferred to Ram Island Lightship and replaced by William H. Smith.

Lighthouse keeping was never meant for the faint-hearted. On March 1, 1914 a huge storm swept in from the east, while inside Latimer Reef Lighthouse, Keeper William H. Smith noted in his log, “The sea was so high that it broke over the Platform and Pier.” Somehow, the keeper was able to single-handedly tie down the station’s two boats, although his personal skiff was smashed to pieces. Not long after that, the woodshed and then the outhouse disappeared under a wall of water. Smith ended a letter to his superiors by noting, “There is no wood at the station. The pier has been weakened.”

The following article published in June 1910 shows how difficult it could be for the keepers to access the lighthouse. Lighthouse Service records don’t list a John Andrews as assistant keeper at Latimer Reef in 1910, but he might have been temporarily assigned to the station.

Capt. Antone Santos saved a man from drifting out to sea and probably drowning Wednesday afternoon and a little while later Capt. Abraham Jenkins did the same. The rescued in the case was the assistant keeper of Latimer reef light, John Andrews, who was trying to get back there in a rowboat after spending a few days off on shore leave. The current was too swift, on account of the strong ebb tide, for him to make the light. Captain Santos picked him up several miles off his course, way out by Moss grounds, rowing for dear life and pretty well tuckered. He towed him and the rowboat into Fishers Island sound near the life saving station and the assistant made another start from there to reach the light.The second attempt was quite as unsuccessful as the first and it was Capt. Abraham Jenkins, who was coming in in his fishing boat, that got him this time. The man was drifting out through Weekapeesit channel, at the east end of Fishers Island about as fast as the tide could carry him. There was not much use trying to row against the current – it was too strong for him. …Captain Jenkins, as he came motoring along at a pretty good clip in his motor boat, turned out to be a friend in need. He threw a life saver to the man adrift and towed him in this time, right up to the light.

The predicaments of the incident had not quite arrived at the stage where the event could be described as a rescue from death or drowning; but that is about the way the man in the rowboat looks at it, however, and thinks that Captains Santos and Jenkins are entitled to a Carnegie medal.

The station was automated in 1954, and the three coastguardsmen connected with the lighthouse were reassigned to Fort Trumbull. In 1983, the fourth-order Fresnel lens was removed from the lighthouse and replaced with a 300-mm lens. The old lens was apparently moved to Elbow of Cross Ledge Lighthouse in Delaware Bay. Latimer Reef Lighthouse continues to flash a white light every six seconds, using a modern, solar-powered optic.

In July 2008, Latimer Reef Lighthouse, deemed excess by the Coast Guard, was “made available at no cost to eligible entities defined as Federal Agencies, state and local agencies, non-profit corporations, educational agencies, or community development organizations, for education, park, recreation, cultural, or historic preservation purposes.” After no organization was awarded the lighthouse, it was placed on the General Services Administration online auction site on June 30, 2010. The property ended up selling for $225,000 on August 23, 2010 to a bidder with the code name “nogard.” The new owner of the lighthouse has been identified as Scott Phillips, who in 2015 started Latimer Light Capital, a financial services company.

Sorry, no records were found. Please adjust your search criteria and try again.