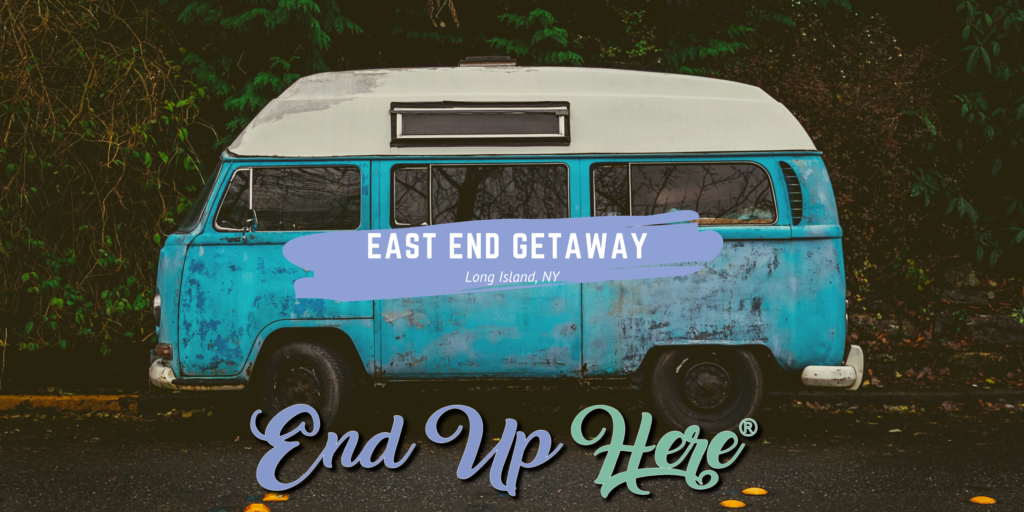 The gateway to the Hamptons and North Fork of Long Island is approximately 75 miles away from midtown Manhattan. If you are coming from New England, Riverhead is just over 20 miles away from the Port Jefferson ferry station. Though there are many convenient ways to get to the East End, whether it be by car, train or bus, it is essential to know the easiest routes and methods to save precious time and added expense.
From the most useful driving routes throughout the East End to practical time frames for travel, we break down easiest and most convenient routes for traveling to and within the Hamptons and North Fork.

Traveling to the Hamptons and North Fork

Whether you own or rent a vehicle, driving to either the Hamptons or North Fork is the most convenient method of transportation. take five 495 E. towards exit 70, then take RT 111 through Manorville, to Montauk highway, also known as NY 27. In Manorville, you will find some restaurants, gas stations, and other convenient stores.
The most essential fact to keep in mind, is how to effectively navigate the potential traffic buildup during the high season (July & August), and in the early mornings during the week, Monday through Friday between the hours of 6:30am-9am. This weekday traffic buildup is also known as the “trade parade” by locals. The traffic may span as far back at exit 64 off of Montauk highway in Hampton Bays and continue all the way to Amagansett.
To help alleviate running into this traffic congestion, first, avoid traveling during these peak hours, that includes leaving the Hamptons in particular to go back west. Leave either before 3:30pm Sunday-Friday or after 8pm those same days.
Your main route through the Hampton Taste is Montauk Highway. Whereas sound Avenue and Route 25 are your main route through the North Fork. Route 114 connects you from East Hampton all the way through Shelter Island if you want to reach the North Fork.
Cycling through Shetler Island may be your best option if you enjoy riding through the quiet countryside. Park your vehicle at either small lot adjacent to the South Ferry in North Haven, or in Greenport if you are coming from the North Fork. Please keep in mind that Shelter Island does not have many bike paths, so please ride with caution. Wear a reflecting vest when riding at night as there are also very few street lights.
Should you wish not to drive as frequently out east, taxis, Uber and Lyft vehicles are readily available.

The train is one of the fastest and most direct methods of transportation to travel to either the Hamptons or North Fork of Long Island. You would take the Long Island Rail Road (LIRR) train out of New York’s Penn Station and either transfer at Jamaica Station in Queens or in Ronkonkoma.
To get to the North Fork by train, take the Ronkonkoma Branch of the LIRR, which eventually turns into the Greenport Branch after Ronkonkoma. Stops include Riverhead, Mattituck, Southold, and Greenport.
To get to the South Fork by train, take the Montauk Branch, which stops in Patchogue, Westhampton, Hampton Bays, Southampton, Bridgehampton, East Hampton, Amagansett and Montauk.
24 hour and 7-day parking options are available at or near most train stations.

The two main bus companies that transport passengers to and from New York City are the Hampton Jitney/Hampton Ambassador and the Hampton Luxury Liner. The Hampton journey operates year round. Hampton Luxury Liner runs during the spring, summer and early autumn season.
The least expensive option is to pay for your ticket in advance online. Check your tickets carefully before making your purchase to make sure that you are aware of which cross street to pick up the bus in Manhattan, and your drop off location.

There are two main ferry routes from New England. The first is the Port Jefferson/Bridgeport ferry from Bridgeport, Connecticut. The second is the Long Island Sound Ferry that goes between Orient Point on the North Fork and New London, Connecticut.
Reservations should be made in advance online. It is recommended that you arrive at least a half hour prior to departure. Long-term/day/overnight parking is available on a limited basis in both Orient Point and in Port Jefferson. Ferries run on or close to schedule, with additional ferry times during peak season.
In between the North and South Fork via Shelter Island, there is the North Ferry and the South Ferry. Please note that these ferries accept cash only. One way and round trip options are available.

With less than an hour of travel time, there’s no faster way to get to the Hamptons than one of the regular helicopters that depart Manhattan.
Blade, known as the “Uber for helicopters” schedules a couple of flights per week to East Hampton Airport off of Daniels Hole Road, for $795 per seat one-way. Perhaps this may be an opportunity to treat yourself and your guest for the ultimate and luxurious comfort on your way out east. It certainly does beat the potential of sitting in heavy traffic!
Please note that any luggage or parcels you bring will be strictly limited to 25 pounds.

Traveling within the Hamptons

When traveling within the Hamptons during the hi season, or between memorial day and Labor Day, it is recommended to avoid driving on Montauk highway for long lengths of time during peak hours. Peak hours are in the mornings Monday through Friday, and during the weekend until 8 PM on Sunday. The most congested areas are as you head east into Water Mill, the Bridgehampton in Shopping Plaza, and just before you enter Wainscott.
To help avoid this traffic, use the back roads through Sag Harbor and Southampton via Noyack Road and Scuttle Hole Road through Bridgehampton and Water Mill.

Both the Hamptons and North Fork have ample parking options throughout each town and village.
The key takeaway is to make sure that you read the signs carefully for parking. Note which spaces must be paid for in advance, versus parking options that are complementary. If parking is complimentary, take a careful note of the time frame. For instance, throughout the Hamptons, many parking spaces are only allotted for two-hour time slots.
Parking attendants/traffic monitors are very strict and will impose a fee should you go over the time limit. Note also that most of his time limit and at about 6 PM, a perfect time to go out to dinner and or to the movies.

The town of East Hampton offers complimentary transportation via the Hampton Hopper on the Montauk Loop. Free rides span from June 24th to September 6th. The Hampton Hopper runs daily between 10am-10pm and stops at various popular destinations throughout Montauk approximately every 30 minutes including the Montauk Yacht Club, Gosman’s Dock, Montauk Chamber, Gurney’s Montauk, and others. 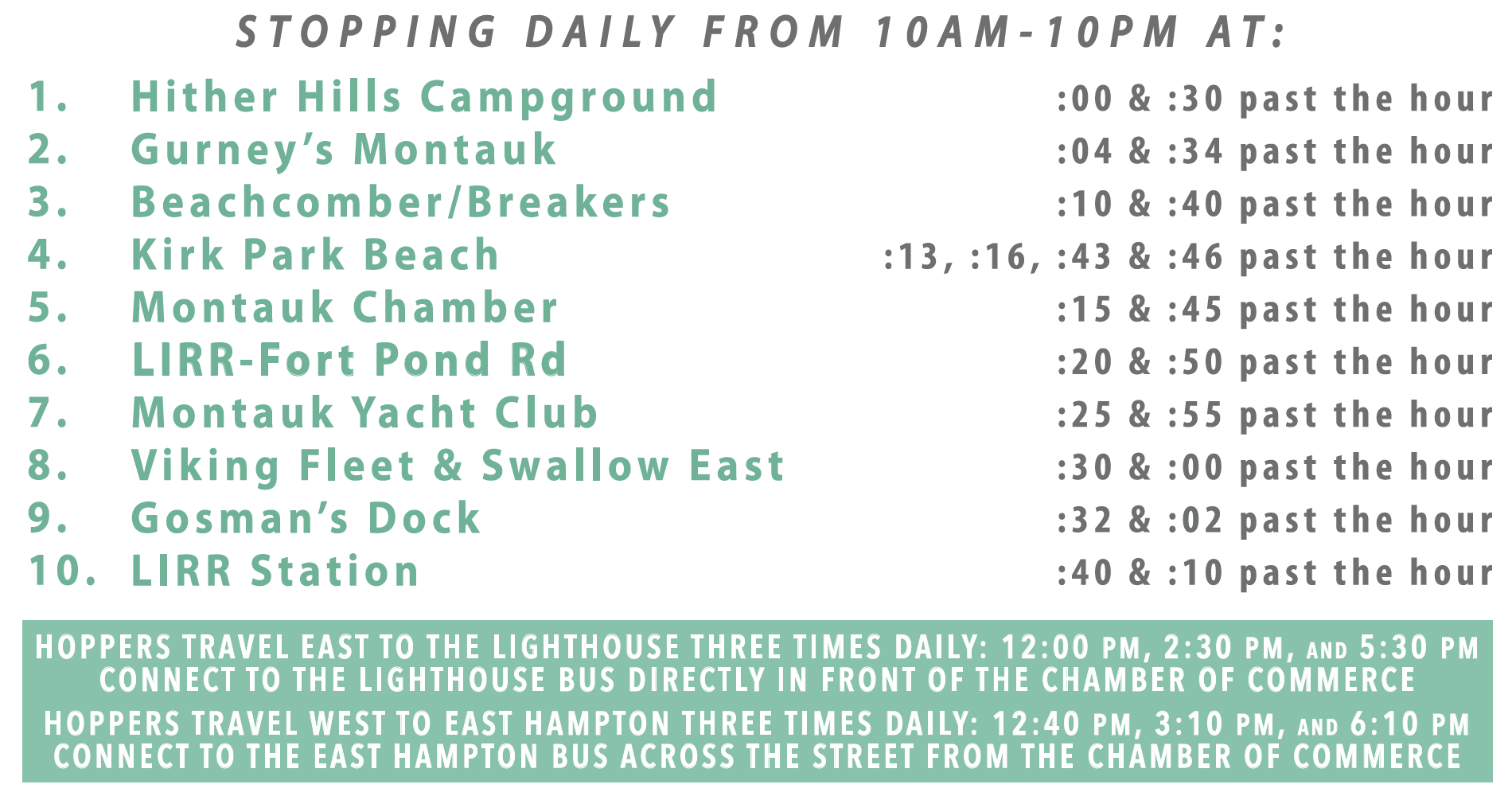